Intersteen T.E.A.M is a project that was awarded a national prize at the 2016 eTwinning National Prizes edition for the 16-19 age category. The project partner schools from Spain, Italy, Greece, and Turkey focused on the creation of a digital magazine written in English about current national and international affairs. The main goal was to develop the communicative competence in English by conducting investigative work and analyzing current affairs from a historical and geographical perspective. Carmen Mellado, the project coordinator of the IES Albert Einstein school (Seville), describes the different stages of the project development.

In October 2014, three teachers of linguistic and non linguistic areas from the I.E.S. Albert Einstein school in Seville began a new integrated project for students enrolled in 1st and 2nd year of Bachillerato. It involved the active participation of several students aged 14 to 18 years old and eight teachers from five secondary education schools. Our main goal was to foster communication, intercultural dialogue, using digital tools for searching and collecting information, analyzing data, and writing articles to publish in a digital magazine. The final result was the publication of the “Interesteen T.E.A.M.” digital magazine; it was written in English and created by work teams that consisted of students from five European countries. The magazine was used as a space to compare the cultures of the different European countries involved in the project and to reveal issues that had an impact on our world from different perspectives. We had the same European partners and we could draw on our past experience with the previous project “Interesteen: an on-line magazine for cultural exchanges”, which was the runner up for the 2015 European prizes for the 12-15 age category. This made our work easier. The students were more motivated at work and team work was better organized. 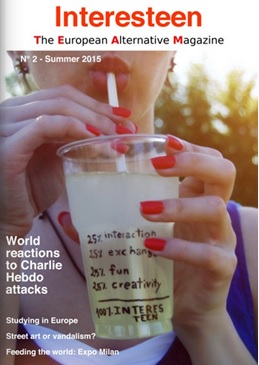 This project is based on the principles of the task-based approach, on active collaboration in problem solving, and on meaningful learning in which the leading roles in the learning process belong to the students who receive constant guidance from their teachers. We tried to make the learning experience genuine, link it to our students’ interests, and promote it inside the classroom as well as outside it. Students were involved in the decision making process choosing articles, photographs, and topics for our magazine; we used surveys and online discussion forums provided by the eTwinning collaborative platform in order to find out the students’ opinions. Teachers provided them with guidance and suggestions on how to approach their articles; the goal was to foster students’ originality, creativity, critical thinking and for them to acknowledge copyrights.

This project helped us to provide our English classes and the other nonlinguistic subjects taught in English with a more communicative approach. It promoted autonomy and freedom of speech and it made language learning easier providing real context inside and outside the classroom. In short, with this methodological approach our students developed key competences to become citizens of the 21st century.

The main curricular skills that we worked on in this project are: 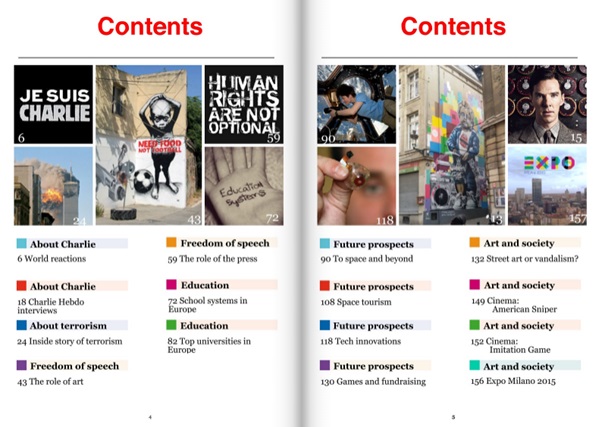 The main achievement of this collaborative project was the active involvement of our students, who gained more confidence in themselves, showed more initiative, motivation, and interest in finding out more about other cultures. They learnt to work in teams, share responsibilities, solve problems, and negotiate when it came to making joint decisions. Working in collaborative groups meant that the involvement of each student depended on his/her skills and that there was a great deal of tasks on different levels. Moreover, the students improved their foreign language level in a more communicative and fun way. As for the teachers, we also had the chance to work in teams with colleagues from our own schools as well as with other European teachers; we shared different methodological approaches, ideas, resources, and tools. At a school level, the schools involved had the opportunity to develop links with other European schools with a view to exchange best teaching practices.

The project was renewed this present school year as part of our curriculum for 4 year ESO and Bachillerato; it is a part of the different integrated projects offered at our school. We have a new partner school this year and new teachers from different non linguistic subject areas, such as history and ethics.

As for the teachers involved, being given the National Quality Label and especially being awarded the highest recognition at a national level brought us great personal satisfaction and motivated us to keep working in the same way, with more enthusiasm and excitement than ever in an inspiring project designed by and for young Europeans.

This is the link to our magazine:

Move2Learn, Learn2Move: ¡participa ya!
Are you ready to live in the 21st century?
Breaking down barriers and riding a bike through eTwinning. Experiences of 5th and 6th grade Primary Education students