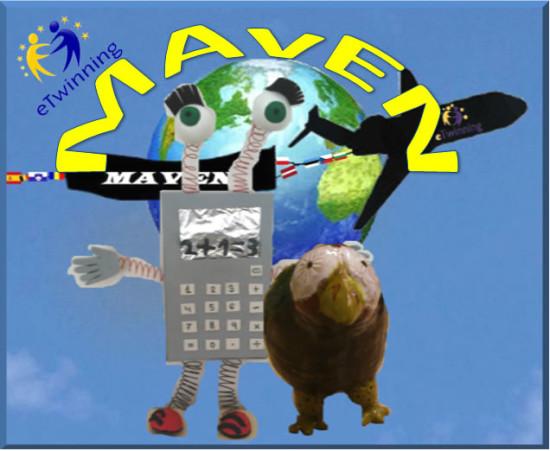 MAVEN is a project that promotes the learning of mathematics and English in an enjoyable way by using games, acrostic creations and videos, linking mathematics to geography and making a calendar with dates of birth of famous mathematicians. It’s aimed at pupils between 12 and 15 years old, with schools in Latvia, Estonia, Romania, Poland, Belgium, Slovenia, Bulgaria, the Czech Republic and Spain taking part. A number of mathematical problems are solved through videoconferencing with partners. Project mascots that travel to partner countries are used as the theme, taking surprises such as QR codes, crossword puzzles, questionnaires, etc. Each month it features the work of the pupils who have participated most actively in mathematics and English fields.

Good communication has been noted between partners and we should emphasize correct planning and distribution of tasks that are rotated during the course of the project. Access to the project TwinSpace: http://new-twinspace.etwinning.net/c/portal/layout?p_l_id=34601361

Lorenzo Castilla Mora, coordinator of the project and teacher at the IES Diego de Guzmán y Quesada secondary school (Huelva) describes the key aspects in the implementation of the Project, as well as its benefits for the school and participating pupils.

MAVEN is a project to promote the learning of Mathematics in English through videoconferences, games and varied activities. At the same time, other transversal subjects on the curriculum are studied: geography, plastic and visual arts or ICT using CLIL methodology. Coordinated by Alesja Spihala (Latvia) and Tatjana Amerhanova (Estonia), nine schools from nine countries have participated — Belgium, Bulgaria, Slovenia, Spain, Estonia, Latvia, Poland, the Czech Republic and Romania — with twelve teachers and more than one hundred pupils aged between 12 and 15.

The project has had several aims. Firstly, pupils are encouraged to learn mathematics in English by using CLIL methodology, which involves developing skills in several disciplines: English, mathematics and computer science. Secondly, by improving collaborative and communication skills and those related to new technologies, not only for pupils but teachers too. Finally, the project has served as a platform to create and/or share resources and materials.

The project started with the “Getting to Know Each Other” activity in which the different schools and countries, as well as the individual pupils, were introduced through a mathematical poem.

Once introduced, the pupils created some heroes for the project, which after voting turned out to be an expert in English — Mr Quick— and a mathematician —Calculator—. Calculator in particular was created by Spanish children. These heroes were sent by email from one school to another with secret mathematical messages (QR codes, crosswords, questionnaires …) that each school prepared for the receiving school. Once received at their destinations a mathematical competition is organized at the school to solve the secrets that the hero brings and to obtain the prizes that accompany the hero.

Figure 4: Arrival of Mr. Quick in Spain with mathematical tasks and gifts for the winners.

Once a month the pupils write a chapter of the book “The legend of MAVEN’s adventures”, whose leading characters are our heroes. It tells the adventures of the heroes in the different continents, including mathematical problems, hieroglyphics, etc. At the end of each month, the schools upload their chapter to BoomWriter and a vote is taken through that application without knowing the authors of the stories. The one with most votes is the final chapter of the book. In the case of Spain, the chapters written have been the ones with the most votes for several months.

Throughout the project there have been other activities such as video tutorials. The activities each month are related to a subject in the mathematics curriculum and a continent. This subject has been used to write the chapters of the book, draw illustrations, organize lessons in videoconferences between partners, create bookmarks, mathematical calendars, video tutorials, mind maps with Pooplet, etc. 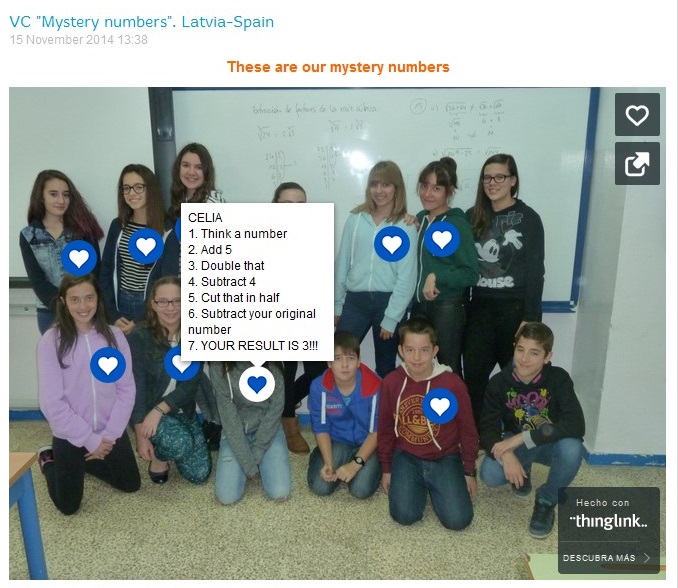 To show the relationships between real life and Mathematics there is a “Mathematics and English on holiday” space where celebrations are shown “mathematically”.

ln addition, in an effort to motivate students, the most active one in the project appears in the Hall of Fame every month.

The most interesting result of the project is the interest it aroused in pupils to participate in Mathematics activities and to be able to study the subject from a different perspective and with a methodology more in line with the times that we live in. This has led to an increase in pupils’ motivation, in both Mathematics and English, and the interconnection of these subjects with others such as Geography or Computer Science. In addition, teachers have also made significant progress in using the CLIL methodology. Major advances have been made in the use of ICT by both pupils and teachers, since they’ve been used constantly in the project:

As for the tangible results, the most outstanding one is a book with the stories experienced by the heroes in the different continents, and which contains interesting mathematical challenges and stories that interconnect mathematics with other disciplines. But this hasn’t been the only physical result of the project, since questionnaires have also been created about mathematical concepts, questionnaires for working on mathematics in English, bookmarks with mathematical information, tutorials on some subjects studied, a mathematical calendar … All this material can be used in the future by both the project participants and the rest of the educational community.

Figure 6: Book with mathematical challenges and stories of heroes around the world. (https://issuu.com/alesja.shapkova/docs/book_maven_adventure?e=14846280/13058025)

Figure 7: Video about coordinates in the plane. (https://www.youtube.com/watch?v=ojQ51QMzlYw)

Pupils who have participated in the project have been pretty involved. As an example, we should highlight the work they’ve done outside the classroom, such as video recording, preparation of activities for Skype sessions or creation of heroes with different materials. And they haven’t had any trouble doing minor research jobs on the subjects proposed each month to write the chapter of the book.

Benefits for the school

Participation in this project has had many advantages in our case. We’re an English bilingual school and I teach mathematics in English to the group of pupils participating in the project. So it’s been a very positive experience for my pupils. Not only for the group participating in the project but also for the rest of the 2nd year secondary school group to which they belong. To give an example, during the videoconferences the whole class participates as part of its mathematics education in English. Pupils see the need and usefulness of learning English and mathematics in English in order to interact with people from other places.

This project has also served to encourage other teachers at the school to carry out an eTwinning project with schools from other countries with which they do exchanges and to collaborate more closely.

The overall balance of the project shows more successes than mistakes. The selection of materials, the sequencing of project activities, the use of a large number of ICT tools or the contact with other schools through Skype has been successful. But this doesn’t mean that everything has gone smoothly. For example, it must be acknowledged that the large number of participating countries makes it difficult to coordinate and allocate the tasks or time needed to reach a consensus on decisions. Another problem was that the teachers didn’t know the way others worked because, at certain times, there have been small discrepancies in the effort that each one was willing to make.

Furthermore, it’s been difficult to guide such a young group of pupils who were completely unaware of what it was like to be in such a project and its demands.

However, as has been said, the balance is positive and it’s certainly been worth carrying out this project.

From my point of view, recognition is always welcome and encourages us to carry on working. In particular, the recognition with this project — national quality label, European quality label, finalist in the European awards and winner of a national award — has given me great satisfaction, even more so as it is my first eTwinning project. This makes any professional proud because it is the recognition of a job done with enthusiasm and with the satisfaction produced on seeing your pupils with a desire to learn.