Programming in the classroom with eTwinning 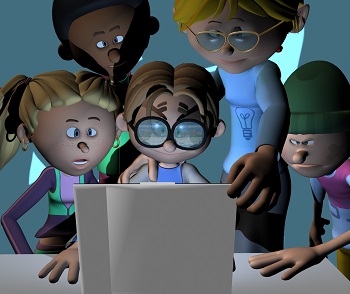 The use of mobile applications by all of us is an everyday habit. We could not imagine our daily lives without communicating through instant messaging, without checking before leaving on the weather or traffic conditions, without motorizing our physical activity, or without playing that game that is so addictive.

In this context, programming has become the new form of literacy of the 21st century. As argued almost ten years ago by Jeannette Wing in her article computational thinking, this new competence should be included in the formal education of all children, due to the numerous advantages that learning can mean, which include the following:

– It encourages the learning of mathematics, engineering, technology and science. In Wing’s own words: “Computational thinking involves facing problems and solving them, designing systems and understanding human behaviour, by drawing on the concepts fundamental to computer science.”Similarly, it also promotes the critical and abstract thinking of pupils and their logical reasoning and creativity

-This is an innovative resource and very closely linked to the pupils, so that it can be used to motivate them when working.

– It can open doors in the employment world for our pupils, since it is estimated that, by 2020, vacancies for jobs related to ICTs will amount to 825,000, in which programming will play an essential role. Similarly, there will be many jobs that will require programming skills, despite not being directly related to ICTs, as indicated in the report by the European Commission.

– It is suitable for the work content of any material, whether or not it’s the scientific-technological field, even for interdisciplinary projects, and at any stage of education, from kindergarten to high school.

–There is no need to be an expert programmer or even to have any prior knowledge. Any teacher with a basic knowledge of computers can enter the world of programming through the numerous open tutorials that can be found on the network, such as those we can find  here  and here.

In this situation, the educational community has already begun to take action: from the public administration, programming content has been incorporated into the official curricula of some Autonomous Communities and pilot projects are being carried out, such as “Let’s mobilise Computer Science” in Catalonia.

Furthermore, the European Commission, with the support of technology companies like Microsoft, SAP, Liberty Global and Facebook, has created the European Programming Initiative, or “All You Need Is {C<3DE}”, whose main objective is to promote programming and computer science throughout Europe, both inside and outside school.

In addition, technological and computer teams have developed various resources, programmes and tools, maybe not with the specific aim of incorporating them into the classroom, but which are being used with very positive results in the teaching and learning process. Common to all of them, and their great advantage, is that no actual programming language is used, but instead graphic blocks simulating jigsaw pieces that have to be inserted to create the desired sequence. This makes the programming process much simpler, meaning that virtually anyone can create an application. Among them, we can highlight the following: Scratch,, a tool used by millions of users worldwide, and its version for children of 5-7: Scratch Jr; Lightbot, also intended for children, allows you to start working on logic from the basics by solving puzzles at different levels; App Inventor,a tool for creating applications for Android devices; and lastly Code, a tool for children to create videogames.

Finally, the teaching teams are those that incorporate everything into their classes, working and performing various activities with their pupils. Within the eTwinning community, these practices are starting to be seen in projects whose main focus is programming. Some examples are shown below:

“Encoding is easy”, coordinated by the teacher Rubén Alarcón  (Collegi Francesc de Borja Moll-Palma de Mallorca), is a project in which pupils aged between 10 and 12 from Spain, Poland, Greece and Turkey create applications with Scratch to present and tell the other members about where they live, what their school is like, what their hobbies are, etc. According to Rubén Alarcón, 5th and 6th year primary pupils found it very interesting, and at the same time it allowed them to understand what programming is through such an interesting tool like Scratch. Futhermore, added the teacher, in his view, with participation in projects like this it is possible achieve the best thing about using ICT, as well as getting the best out of eTwinning: bringing people together.

It is a fact that programming is the new competence of the 21st century; and a reality that schools are key players in the correct acquisition by pupils. From here we invite you to immerse yourself in this world and start working with your pupils in this field, and to create eTwinning projects. You definitely won’t regret it.

Source of images: INTEF free to use Image Bank, TS screenshots in the projects reviewed, Scratch screenshots, “All you need is code” screenshots.