The Origami project implemented by the CEIP Les Arenes school (Valencia) was awarded the 2017 eTwinning National prize for the age category 0-11 years old for projects carried out in the 2015/2016 school year..

On May 9th we were given the chance to visit CEIP Les Arenes, a school from Valencia which has a long history of working in eTwinning. Ana Furio, the eTwinning representative in the Valencia autonomous community, accompanied us during the visit; so did the school head teacher who showed us the school facilities and told us something about the neighborhood where the school is situated in and of the school context in general. After a tour of CEIP Les Arenes’ extensive facilities, we visited Mª José García Ruano’s classroom; during the last few years, she has been the coordinator of the eTwinning projects carried out in the school. Moreover, she won a prize at the most recent eTwinning National Prizes edition with her project Origami.

We entered Maria José’s classroom and her students welcomed us with excitement and eager to tell us everything about what they did in eTwinning. They took out all the Origami materials from the project chest and decorated the classroom to show us how the room was throughout the duration of the project last school year. 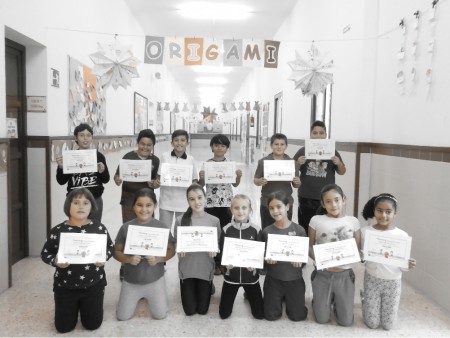 We asked Mª José to tell us about Origami and she said, “It’s an eTwinning project that we implemented last year together with our Ukrainian partners from Oleksandria school № 9 during the 2015-2016 school year. At that time, my students were in year 3 of Primary school and were 9 and 10 years old. The starting point for the project was the interest teachers showed in learning how to manage student emotions as they had spotted certain emotional problems in the students; the teachers wanted to know how to handle these problems in order to achieve better academic results and coexistence. Our goal was to work on emotions together with our students and to share our experiences with our partners; but first, we introduced ourselves and gave information about our schools. As you know, it’s important to get to know each other first before talking about emotions.”.

The starting point for this project was an excellent 8 minute short film called “Origami” about a teenager and his grandfather and their connection with emotions through origami. From there, they went onto different activities, for instance the emotions tree. The star activity of the project entailed gamification and designing the game of emotions. Mª José describes it, “It was created by us, the two teachers from Spain and Ukraine using the collaborative tool Genial.ly. We involved the students from the beginning since we wanted the game to be a joint effort. Our students were responsible of devising many of the game’s tests, the tutorials, choosing the images, designing the questionnaires, and the drawings. The game consists of a collaborative board created around the basic emotions (joy, sadness, surprise and anger); in order to play the game, we created two student teams of mixed nationality, the Joy team and the Sadness team.”

Besides the collaborative game, another objective was to develop the linguistic communication competence by creating a book of emotions. The first step towards creating the book was a reading promotion activity in which the student families were involved. The activity was lead by the mother of student and it focused on a story that revolves around fear. The story was Switch on the Night by Ray Bradbury, from Kókinos publishing house. This lead to us asking the pupils the question, “And you? What are you afraid of?” This was the title of the book they created to tell us about the things that made them afraid and work on this emotion in particular..

While we were visiting, the students, who are now finishing year 4 of Primary education showed us all the project activities on Origami’s TwinSpace. María José told us that the project impact was very positive for the students and that there was no question about the fact that the coexistence in the classroom had clearly improved as well as the students’ academic results. Of note is that children had become more involved in the teaching and learning activities, even those who used to be less motivated. Moreover, the project was integrated into two of the school’s activities, the emotions carnival and the Cultural week.

Congratulations to the students and to the teaching team of CEIP Les Arenes school for making these eTwinning experiences possible!!!